Lake, Massillon Both Win, To Face Off In Regional Final

It’s the match up all of Stark County was hoping for in the OHSAA Football Playoffs – Lake vs Massillon.

It all came to fruition on wet and windy Friday night in Division 2/Region 7 as the Lake Blue Streaks defeated Westerville South 16-7 at Crater Stadium in Dover, Ohio and Massillon knocked off Big Walnut 42-21 at Arlin Stadium in Mansfield, Ohio.

A stout Lake defense held the Wildcats to 145 total yards and quarterback turned running back #6 Will Butler carried a banged up Blue Streaks offense. 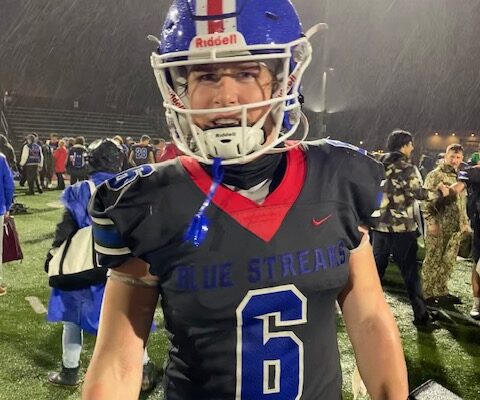 On just the second play of the game, Lake senior running back Matt Sollberger ran for 6 yards, but as he was tackled, suffered a ankle/leg injury and was lost for the game. That forced head coach Dan DeGeorge to move Butler, who splits time with Cale Jarvis at quarterback, to running back to fill the void, and it worked out, as the Federal League Player of the Year ran for 110 yards and 2 touchdowns to help the Streaks pick up their 12th win of the season.

Special teams were also huge for Lake as All-County punter/kicker Celton Dutton nailed a 34 yard field to break a 7-7 tie in the 4th quarter and also had a ginormous night punting the ball, as he boomed it 6 times for a 42.2 yard average.

Massillon started slow in their win over the Golden Eagles, falling behind 9-0 before rallying and then dominating the game, outscoring Big Walnut 42-12 the rest of the way to pick up their 11th victory of the season.

So that sets up a showdown between the Blue Streaks and the Tigers on Friday night in the Division 2/Region 7 Final.

The site/location of that game has yet to be determined, but wherever it is played, News-Talk 1480 WHBC and Mix 94.1 will carry the game live on the radio and stream it live as well at WHBCSports.com.