Behind stellar offensive and defensive line play the Massillon Tigers ran past the Lake Blue Streaks at a cold, icy and windy Byers Field in Parma Friday night 24-6 to win the division 2 – region 7 championship. 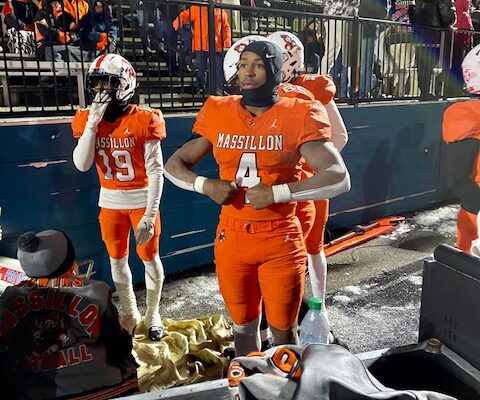 Massillon running back Willtrell Hartson led the way with 175 yards and 1 touchdown on 40 carries. With the 175 yards rushing, Hartson tied the Tigers single season rushing mark of 1,976 yards set by Travis McGuire back in 1991.

Dorian Pringle also had an outstanding game, running for 46 yards and a touchdown and catching a 5 yard td pass from quarterback Jalen Slaughter.

The Tigers defense dominated the banged up Blue Streaks offense, holding them to just 65 total yards.

The Blue Streaks fine season under Stark County coach of the year Dan DeGeorge comes to an end with a 12-2 record.

The Tigers now move on to the OHSAA state semi-finals where they will play Akron Hoban on Friday, November 25th at Infocision stadium in Akron.