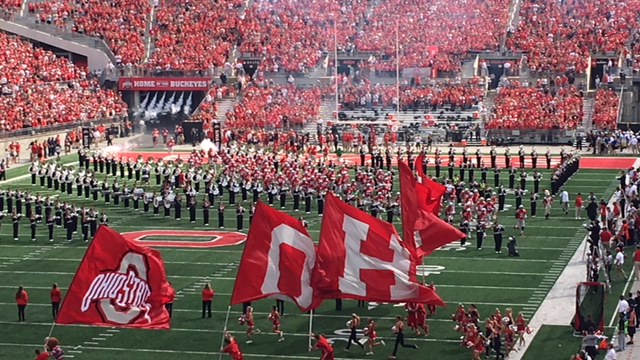 The Urban Meyer distractions have hurt and will continue to hurt this team because the Zach Smith/Courtney Smith story is far from over. It will be brought up by the media, on social media and by the fans in opposing stadiums all season long.

Inexperience at quarterback will cost the Buckeyes at least 1 game. Haskins should have a good year, but unless he proves he can carry a team like a Cam Newton or Jameis Winston, he’ll likely make mistakes in a couple of big games.

No legitimate #1 wide receiver for the 3rd consecutive year. OSU has two #1 running backs in Dobbins and Webber, but no Michael Thomas or Devin Smith type on the outside. A bunch of decent receivers, but no star in the making or a guy you can count on.

Eventually losing all that talent to the NFL on defense will catch up with Ohio State, and unfortunately this will be the year, especially in the secondary. The Buckeyes have lost Eli Apple, Gareon Conley, Marshon Lattimore and Denzel Ward early to the NFL Draft, all going in the 1st round over the last 3 years. Plus losing defensive backs coach Kerry Combs to the Titans in the NFL will also hurt this years defense.

The defensive line will be the strength of the team and could dominate football games. Nick Bosa could end up being better than his brother Joey and if that’s the case, it bodes well for the Buckeyes chances of getting back the playoffs.

The 1-2 punch of running backs J.K. Dobbins and Mike Weber should be the focal point of the offense and should lesson the load on first year quarterback Dwayne Haskins. Last year the duo rushed for over 2,000 yards and 17 touchdowns. If the o-line comes together, the Buckeyes could have one of the most dominant running games in college football this season.

The passing game will be better! Maybe the receivers haven’t developed the last couple of years because they didn’t have a good throwing quarterback. That won’t be the case this year as Haskins can sling it with anybody in college football. So the passing game should be better this year and maybe a receiver will emerge as a big-time target and Haskins will rise to the occasion as the leader of the offense.

You hope that with all of these highly ranked recruiting classes over the years since Urban Meyer took over, that while you lose a lot of talent to the NFL and graduation, you don’t rebuild at Ohio State, you just reload with a studly recruiting class. With that said, which of those talented, unknown players emerge this year for Ohio State and help them beat Michigan again, win another Big 10 title and get back to the college football playoffs. Theey’re should be a few that will make an impact.