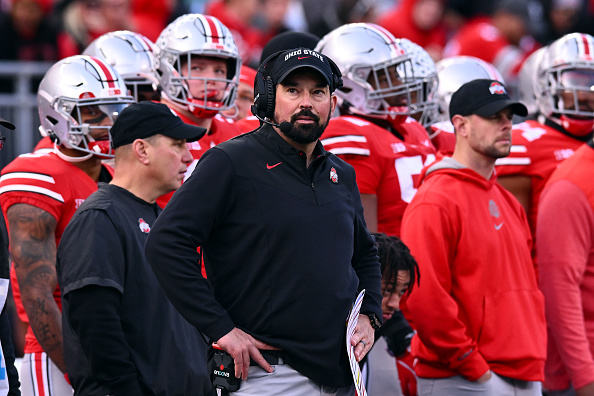 Ohio State’s inability to score touchdowns came back to haunt them in a stunning 45-23 loss at home to Michigan.

While the Buckeyes led 20-17 at the half, missed opportunities and self inflicted wounds kept the Wolverines in the game. Then Michigan dominated the third and fourth quarters, outscoring OSU 28-3 to win for the second straight year, as Jim Harbaugh outcoached Ryan Day with his game planning and adjustments in the second half.

McCarthy was 12-24 for 263 yards with 3 touchdowns and 0 interceptions. He added another touchdown on the ground.

Donovan Edwards, filling in for the injured Blake Corum at running back, had a career day rushing for 216 yards and 2 scores.

Even though he threw for 349 yards, Stroud struggled throughout the afternoon against a solid Michigan defense. He finished with 2 touchdown passes, but also threw 2 interceptions. He is now (0-2) in his career against the Wolverines.

Ohio State’s defense was as much to blame as anything, as Michigan hit on big play, after big play, scoring on touchdown runs or passes of 69 yards, 75 yards, 45 yards, 75 yards and 85 yards. In all, the Wolverines racked up 530 total yards.

Ohio State falls to (11-1) on the year, while Michigan improves to (12-0) this season and will represent the East in next Saturday’s Big Ten Championship game. A win there would put the Wolverines into the College Football Playoff for the second consecutive year.

The Buckeyes will now have to wait and see, and get some help, if there is any chance of sneaking in to the College Football Playoff.