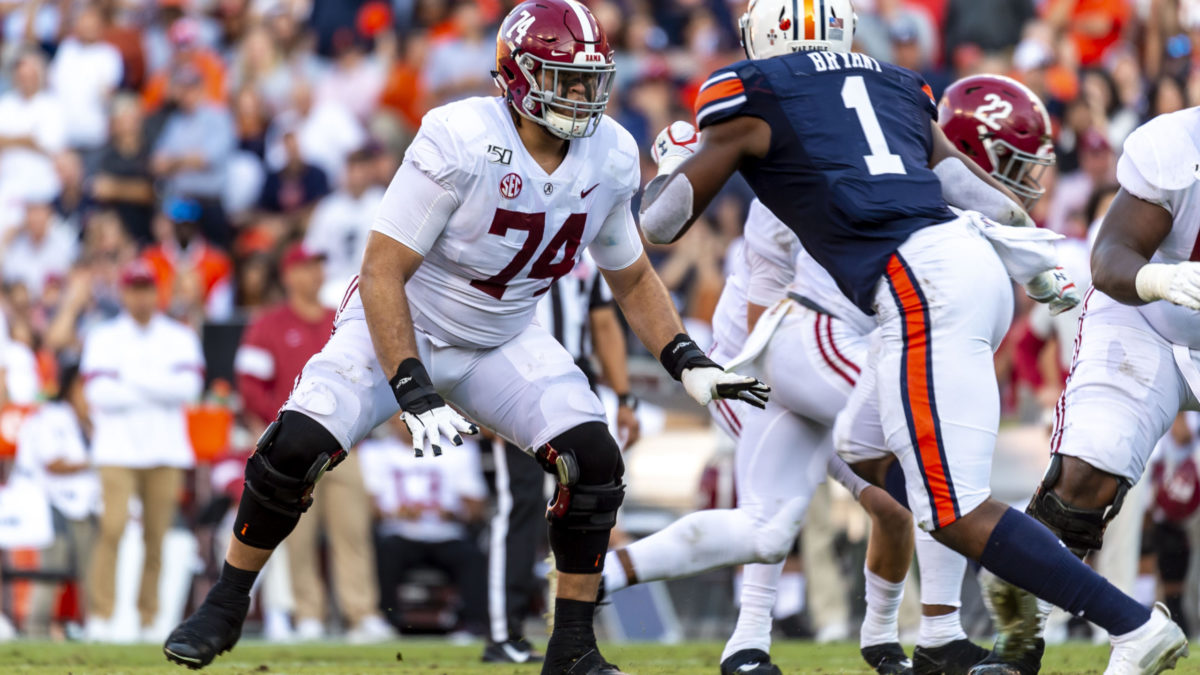 Breaking Down The Browns Draft Picks

After 3 days of virtual drafting, 7 rounds and 7 picks, the 2020 Cleveland Browns draft class, selected by first year G.M. Andrew Berry and first year head coach Kevin Stefanski is complete and it looks like this, with the scouting reports courtesy of Dan Shonka and the Ourlads.com NFL Draft Guide:

1st round – 10th overall – OT – JEDRICK WILLS JR. – Alabama –  6’4-312-5.09
Junior entry, two-year starter, Lexington, KY. Earned first-team
All SEC and second-team All America honors in 2019 as a right
tackle. Was the most physical blocker in the run game on the Crimson
Tide offensive line but also turned heads with his quality, consistent
performance as a pass blocker. It can be hard to locate a true dent in
his armor outside of the fact he can get out-reached by longer
defenders. His footwork and hands are as sure as it gets and he plays
with an ever-present competitive streak that every team wants in
the trenches. Has the look of a first-year starter who could move
inside as needed. Powerfully built and fully capable of taking on
downhill contact while in a standstill position. Creates and maintains
a wide, sturdy base. Feet are lightning-quick and always active.
Maintains strong position throughout the engagement with his man.
Knees and hands are kept inside. Stays square to his target with more
than enough knee bend and is rarely caught out of position or off
balance. Has elite burst out of his snap and converts that explosion
into power. Competitive spirit. Loves to take on the role of a lead
blocker and personal protector. Length appears to be an issue against
bigger, more powerful defenders. Has a hard time protecting his
chest and it will cause him to play from an initial deficit. Seems slow
to mentally react and see stunts and twists. Zeroes in on his initial
target and will lose track of late, lateral movement.
First round projection. (A-34 1/4, H-10, BP-DNP, 10-1.81).

Junior entry, three-year starter, Houston, TX. First-team all-conference and second-team All-America. Excellent size for the position.  Has been used in a variety of coverage in multiple spots on
the field. Has excelled in both deep coverage and playing in the box
or on the edge. Teams have to account for where he is on the field.
Explosive in run support with big hits. Can drop ball carriers in their
tracks. Makes quick adjustments in space and normally gathers and
finishes tackles. Outstanding range in pursuit and coverage. Always
around the ball. Transitions well flipping his hips in deep coverage
or driving on the throw. Has match up skill and can cover a slot
receiver or tight end up the field. Smart defender with vision to see
the quarterback and receivers in zone coverage. Positions well versus
multiple routes in a zone. Makes plays on the ball with hands for the
interception and pass break. Gets his hands to the catch point and
can out-fight a receiver for the ball. Effective blitzing from inside
or outside with good anticipation at the snap. Has made plays in the
backfield versus the run and chasing the quarterback. While a big
hitter, his tackling was inconsistent last fall. There was an inordinate
amount of missed and ankle tackles as he had some trouble wrapping
up due to his ankle injury. This was the only obvious issue over his
career but will have to be addressed by any team considering him. His
skill set is something that should be coveted by an NFL team in any
scheme. 2019 stats: 65 T, 4.5 TFL, 2 sacks, 7 PBU, 1 QBH, 1 FF, 2
INT. No Combine workout-his choice. First round projection. (A-30 3/8, H-9 1/8, VJ-DNP, SS-DNP)

Junior entry, two-year starter, Missouri City, TX. Began his career
at Texas, transferring after the 2016 season. A penetrator with size
and finishing power that can impose his will on ball carriers. He has
plus-speed and quickness in space and can be a package-player at the
next level. Doesn’t engage his lower half enough and gives too much
ground against the running game and double teams to be viewed as an
every-down player at this point, but with the amount of defensive
line rotations the league has now, he will have a place. Carries his
weight with ease with an athletic body and plus-movement tools.
Good speed and quickness for the position. Chases down the action
far away from the point of attack. Will close a gap fast. A true
finisher when he gets near the ball. Has the extra gear late. Can
make himself slim and slippery. Effective lateral mover in a phone
booth that will find a way to penetrate. Can sniff out the action and
will find a way to get there. Has the tool set and work ethic to
develop. Stands too tall out of his stance. Not an effective stay-at home defender. Late to get his hands on, lacks punch. Gives up too
much ground and doesn’t fight the double team. 2019 stats: 44 T, 8.5
TFL, 2.5 sacks, 3 PBU, 6 QBH, 1 BK. Edge speed:left 2.00, right 2.22.
Second/third round projection. (A-32 3/8, H-10 1/4, BP-24, 10-1.69)

Junior entry, two-year starter, Nashville, TN. Started all 15 games
in 2019 in the middle and led the team in tackles. Good length and
athletic ability for the position. Explosive athlete with playmaking
skill. Quick at the snap with instinctive reactions. Fits inside gaps
with a downhill burst. Normally quick to change directions with the
speed to get to the perimeter and make plays in space. Can slip
blocks on the move with quick hands working through a block.
Explosive tackling skill with knee bend and finish. Consistently
finishes tackles. Used often as a backfield spy and zone defender.
Flashes ability to spot drop and get position on receivers. Has solid
fundamental ability to break up passes. Shows some man to man
skill covering a back to the flat. Has blitz skill with a quick take off
and range to chase. Sudden burst gets him to the quarterback. In
coverage, responsibility seemed to be kept to a minimum and depth of zone drop was inconsistent. At times can be overaggressive and
get out of position. Not quite as good with the play right at him and
struggles at times to re-direct off a block. Will occasionally get
upright locating the ball and knocked back by a physical blocker.
The LSU scheme puts linebackers in a position to chase and make
plays. He took advantage of this and was productive. Has also been
outstanding in kick coverage with his speed and sure tackling ability.
Coverage question will need to be answered and some teams may not
feel he is a scheme fit. 2019 stats: 113 T, 7.5 TFL, 1 sack, 1 PBU,
3 QBH, 1 FF. Edge speed:left 2.20, right 2.15. Fourth/fifth round projection. (A-32 3/8, H-10, BP-DNP, SS-4.33).

Three-year starter, Gray, GA. Made the move from offensive tackle
to tight end as a senior in high school. Went on to earn second-team
All Conference USA in 2017 and first-team the past two years. Was
also an All-America and won the John Mackey Award as a senior.
Was the only tight end in the country to finish with over 1,000
yards receiving. The volume of the Florida Atlantic passing game
helped a bit, but his production was no fluke. He has a lot of tools
that translate well to the next level. Tougher than nails, has an
outstanding lower body when it comes to quickness and agility, and
will look to take a defender’s head off when he can. This overly
physical pass catcher may have some size and strength limitations,
but he has the tools to really make a difference in the passing game
right away. A go-getter as a pass catcher. Has a blend of physical and
football intelligence paired with soft hands. Twitchy and loose lower
half that enables him to get in and of breaks like a receiver. Will get
open underneath. Quick to get his head around with hands up and
ready. Seamless adjustments to the ball and will come down with it in
traffic. Shows immediate ability to move north the instant he touches
the ball. Will run over, around, and away from defenders after the
catch. Has a nasty demeanor as a blocker. Locks his hands on, sticks
a strong grip, and will keep his lower body active. Has a slender
frame with short arms. Lacks traditional tight end bulk. May not have
the body to add much more, which will leave him undersized. Effort can
only do so much when blocking inline, he may be limited in that role.
Has a bunch of focus-drops. Doesn’t win his share of 50/50 balls when
he has to go up and get it. 2019 stats: 65-1004, 15.5 ypr, 7 TD.
Third/fourth round projection. (A-30 5/8, H-9 1/2, VJ-32.5, SS-4.37)

Four-year starter, Inglewood, CA. Has experience at all three interior
spots. First-team All Pac 12 in 2019 and 2018, honorable mention
in 2017. He is incredibly twitchy and quick which translates into
power. While he could use more strength training below the waist to
improve his anchor, he is more than powerful enough to make a
physical impact. Can reach defenders that other centers simply
cannot and he has a way of turning his body with full control while
engaged to make himself stick to his target. He is a potential
difference maker in the middle of the line because of how much
range he has. There is a nastiness in him that makes him an every
down threat. Gets off the snap fast and still get his hands on first.
Will replace his hands over and over to maintain inside position.
Feet are as active as it gets. Keeps them churning and it translates
well into power. Reaches the linebacker deep which will create running
lanes for the back. A feisty blocker who understands angles and
leverage. Can turn himself while engaged with the defender.
Outstanding body control and balance, capable of a recoil to reestablish his position. Can re-anchor well via quickness and intelligence.
A smart player who can take control of the line calls. Will need to work
on his anchor. Has a hard time using his base as roots and may shorten
the area for the quarterback to step up to. Hands get a bit wide as a run
blocker. Will widen out his base too much, making him lose lower body
power and struggle to regain balance. Slightly undersized.
Fourth/fifth round projection. (A-32 1/8, H-9 3/4, BP-20, 10-1.77).

Junior entry, three-year starter, Detroit, MI. Earned third-team All
Big 10 honors in 2018 as both a receiver and punt returner. The
former 5-star recruit was also an accomplished high school sprinter
with a near 4.0 grade point average. Never quite lived up to the hype
after a promising freshman All- America season in 2017. The
inconsistent quarterback play combined with a lingering lower body
injury that hampered him in the first half of 2019 left a lot of
unknowns for him. However his athletic ability combined with top
shelf length and hand size in addition to an impressive Combine
leaves him on the positive side of that wonder. This is a receiver
with number one receiver potential that needs to clean up some of
his route running, but already has other traits that will help a team
right away. Long-limbs that are slippery and loose. Has a bendy,
flexible body that is functional and used as a strength for the receiver
position. Explosive straight line athlete with plus-playing strength,
balance, and toughness. A weapon after the catch that will run through
contact. Has runaway speed once he reaches the open field. Smart,
patient route runner over the middle that will find the vacant areas
of the defense. A very quarterback-friendly receiver. Needs more
urgency off the line as an upfield route runner. Can get caught up at the
line by a physical, long press corner. Doesn’t always show the top gear
to get over the top. Production has been inconsistent at Michigan.
2019 stats: 34-438, 12.9 ypr, 6 TD, 24-173 PR, 7.2 avg.
Third/fourth round projection. (A-33 1/2, H-10 1/8, VJ-44.5, SS-DNP)