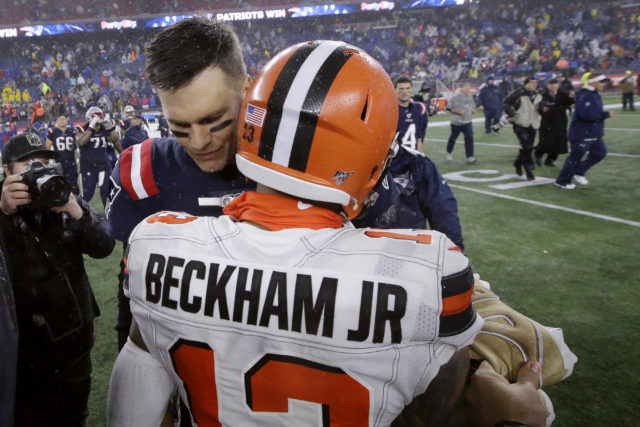 CLEVELAND (News Talk 1480 WHBC) – As first reported by Channel 5 News, one sports book believes that if Tom Brady will anywhere new next season, that Cleveland will be his most likely destination. BetOnline listed the Browns with the best odds to land the six-time Super Bowl champion at +550.

The Carolina Panthers, Las Vegas Raiders and Los Angeles Chargers are all right behind the Browns at +600, while the Dallas Cowboys round out the top five at +700.

I just wanted to say to all of our fans, THANK YOU! After a few days of reflection, I am so grateful and humbled by the unconditional support you have shown me the past two decades. Running out of that tunnel every week is a feeling that is hard to explain. I wish every season ended in a win, but that’s not the nature of sports (or life). Nobody plays to lose. But the reward for working hard is just that, the work!! I have been blessed to find a career I love, teammates who go to battle with me, an organization that believes in me, and fans who have been behind us every step of the way. Every one of us that works at Gillette Stadium strived to do their best, spent themselves at a worthy cause, and prepared to fail while daring greatly (h/t Teddy Roosevelt). And for that, we’ve been rewarded with something that the scoreboard won’t show – the satisfaction of knowing we gave everything to each other in pursuit of a common goal. That is what TEAM is all about. In both life and football, failure is inevitable. You dont always win. You can, however, learn from that failure, pick yourself up with great enthusiasm, and place yourself in the arena again. And that’s right where you will find me. Because I know I still have more to prove.

Brady announced Wednesday morning on Instagram that he will not be retiring and still has “more to prove.”

The three time NFL MVP is a free agent for the first time in his 20 year professional career. While the odds are still in favoring the Patriots to keep Brady in New England (-200 for him to be on the Patriots roster in week 1 of the 2020 NFL Season), there is certainly a line of reasoning that would make Cleveland as good as a destination as any to depart to.

With Patriots offensive coordinator Josh McDaniels rumored to be the favorite to land the Browns head coaching job, Brady would have a friendly face to turn to if he indeed decides to say goodbye to Bill Belichick.

Despite having a disappointing season in 2019, the Browns offense features a host of weapons that Brady could certainly take advantage of. While the offensive line is still a major question mark for the Browns, one would assume Baker Mayfield would be a valuable trade asset that could help fix that.

Mayfield of course plays a big factor in this situation. Entering the 2019, he was Cleveland’s golden boy. Browns fans smiled as they imagined watching him in the post season was right around the corner. Unfortunately for them, the playoff appearance Mayfield made this year was in his series of Progressive commercials (which are very funny).

Singing Brady, who turns 43 in August, would be a huge gamble for the Browns, a team who is already looking to replace a head coach and general manager. The team was aggressive last off season and it did not play out how they had hoped. Maybe the second try could be the charm.

If not, the results could be disastrous. Trading a first overall pick away after just two seasons for a quarterback who is old enough to have children in college could put a franchise into a hole that would be very hard to dig out of; one that Browns fans admittedly know all too well.

However, while Brady might not be the player he was 10 years ago, what he could bring to Cleveland is a winning attitude, something that many could argue was missing inside the Browns locker room this season.

Nonetheless, Brady’s decision will not likely come until after the Browns decide who their next coach will be. After that announcement is made, Brady watch could indeed be in full effect. Do you believe TB12 is the right guy for Cleveland? Let us know your opinion by tweeting at us @1480whbc or by commenting on our Facebook page.