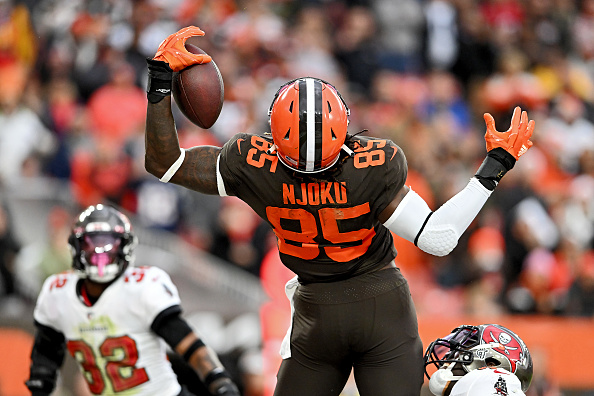 Jacoby Brissett in his final start before turning over the reigns to Deshawn Watson at quarterback, led a fourth quarter comeback for the Browns that lifted them to a 23-17 overtime win at First Energy stadium in Cleveland.

Njoku only caught 5 balls on the day for 29 yards, but it was his spectacular one hand grab that tied the game in regulation that everyone will remember.

Then with just :19 seconds left in ot, Brissett engineered a 71 yard drive that ended with Nick Chubb scoring from 3 yards out for the win.

Chubb finished with 116 yards on 26 carries and the score. With those 116 yards, it puts Chubb over the 1,000 yard mark for the fourth time in his career and for the fourth consecutive season.

Brissett’s numbers for the day against his former teammate in New England, 23 of 37 for 210 yards with the td pass to Njoku and 1 interception.

Tom Brady finished 29-43-246 yards and 2 touchdowns and no interceptions.

Myles Garrett also impacted the game in a big way for Cleveland registering 1.5 sacks and a tackle for loss in the win while playing injured.

The Browns are now (4-7) on the year and get quarterback Deshawn Watson back for Sunday’s game at Houston after Watson sat out the first 11 games as he was suspended by the league for violating the NFL’s personal conduct policy amid allegations of sexual misconduct.