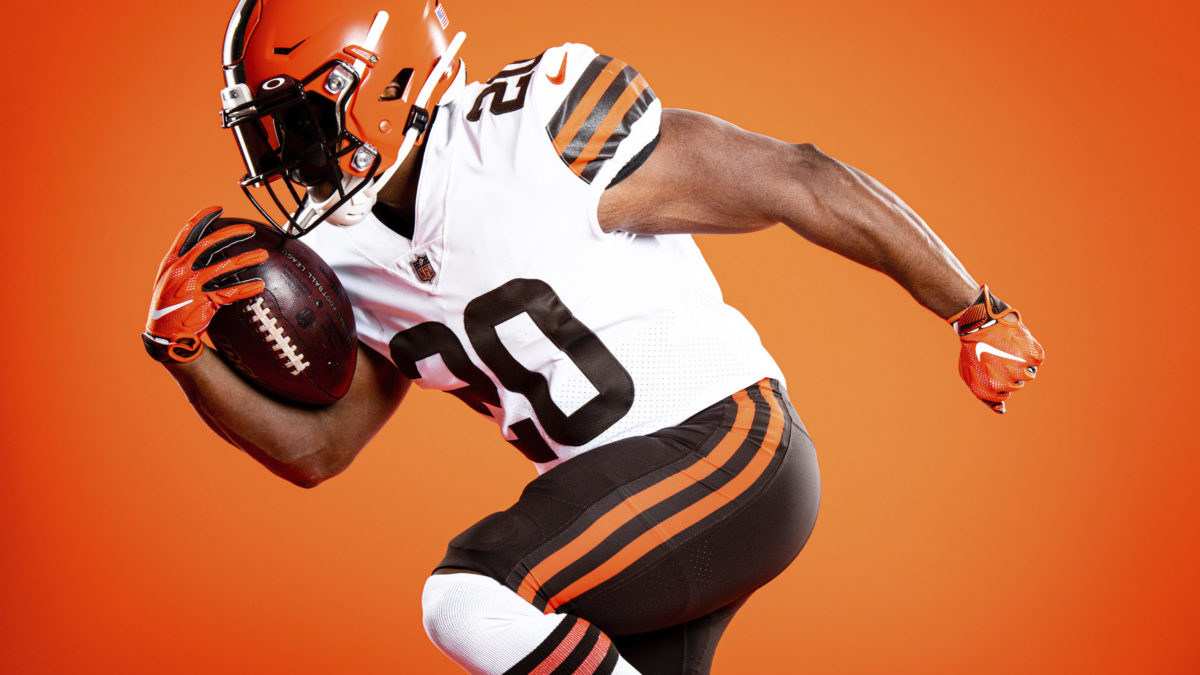 Browns pay homage to past, look ahead to future with new uniforms

Cleveland gets back to its roots with simplified, traditional look

CLEVELAND, Ohio – The Browns are moving forward with a nod to the past.

The Browns on Wednesday debuted their new uniforms for 2020 and beyond, evoking the best memories of the storied franchise’s past with a modern twist. Inspired by the AAFC and NFL champion squads of the 40s, 50s and 60s, the Kardiac Kids, the team’s memorable run through the mid-80s and even some of the best memories in recent years, the Browns’ updated look pays homage to the past while incorporating all of the modern technology of the Nike Vapor Untouchable Uniform, which provides the kind of wear-ability and comfort players expect in the modern NFL.

“As you look at iconic franchises like the Browns, the Bears, the Packers, the Cowboys — they’re true to who they are. They’re not doing a lot of changes and trying to make a lot of flashy moves with their uniforms. I think when we went through the process, it just felt right that we got back to who we are and who we’ll always be.”

With the platform of Wednesday’s unveiling, the Browns are looking to help the true heroes on the front lines of the ongoing global health crisis.

On Monday, the Browns launched the “Hats Off To Our Heroes” Fund, which will focus on aiding health care professionals, first responders, educational professionals and other groups who are pivotal in the community year round and are valiantly persisting as role models in the face of significant adversity due to COVID-19. In addition to personal donations from team members, partners and fans, the Browns, for a significant period of time, will commit 100 percent of the team’s net proceeds from 2020 Browns jersey sales at FirstEnergy Stadium’s Pro Shop, in partnership with Legends, and online through Fanatics.

The team’s Color Rush jerseys — which emerged as a popular look in 2018 and became the team’s official home uniform in 2019 — have undergone slight modifications, including the removal of stripes on the jerseys and pants.

“We put a lot of effort this past season into making sure we can make those uniforms our home primary because the fans liked them, our players liked them. We appreciate the league working with us on that,” Johnson said. “We used some of that as a base. The stripes have always been a part of the brand, whether it was the helmet or the jerseys, starting back in the 1940s and 1950s. It’s just a part of who we are. We just felt like we needed to get back to who we are.”

“Our uniforms have always been iconic. They’ve always been classic. They will forever be iconic and classic now with what we’ve launched and how we feel about them.”

The Browns’ helmet will continue to feature a brown facemask, which was introduced in 2015, but will no longer include carbon fiber texture in the striping. Stitched inside the collar of every jersey is “1946,” the year the team was founded. It replaces “DAWG POUND,” which filled the spot from 2015-19. Additionally, all three jersey fronts will not feature a wordmark above the numbers for a cleaner finish.

“What I like about it is that it’s going forward with the Cleveland Browns and paying respect to this organization and this storied franchise about what the Browns are all about. It pays respect to those players from the past,” Browns longtime Director of Equipment Operations Brad Melland said. “I think they did a great job on the production and design of this uniform, and I am extremely happy because this represents what the Browns are really all about.”

The Browns worked closely with Nike to get the team back to its roots in a process that began, in earnest, in 2017. Though a number of design concepts were examined over the past two years, it was clear from the start the Browns knew what they wanted the final product to be.

“Having that complete internal alignment on the Browns side and buying into exactly knowing what it is they wanted really made this process a joy to work through,” said Jonathan Wright, the NFL’s Senior Director of Uniforms and On-Field Products. “It wasn’t a constant shifting of left-right, left-right, which is how I play golf. This was how normal people play golf — you hit it toward the hole. You have a goal, and you achieve it. This was one that was very streamlined. When we’re given a direction and Nike’s given a direction that’s clear and concise, it makes it a much easier process. It was a lot of fun, actually.”

Melland and Johnson saw firsthand the kind of excitement Browns players showed when they donned the Color Rush uniforms for the first time back in 2018. A number of them were looped into the process, and it became clear they shared a similar desire to go back to a look that embraced everything the franchise has typified since 1946.

“We just felt like getting back to our roots and going back to who we are and who we’ll always be is a reason why we made this change,” Johnson said. “We hope that our fans, alumni and players, who are obviously really excited about it, will be happy with the direction where we went.”

Go to www.ClevelandBrowns.com for more photos of the new uniforms and a chance to purchase them.