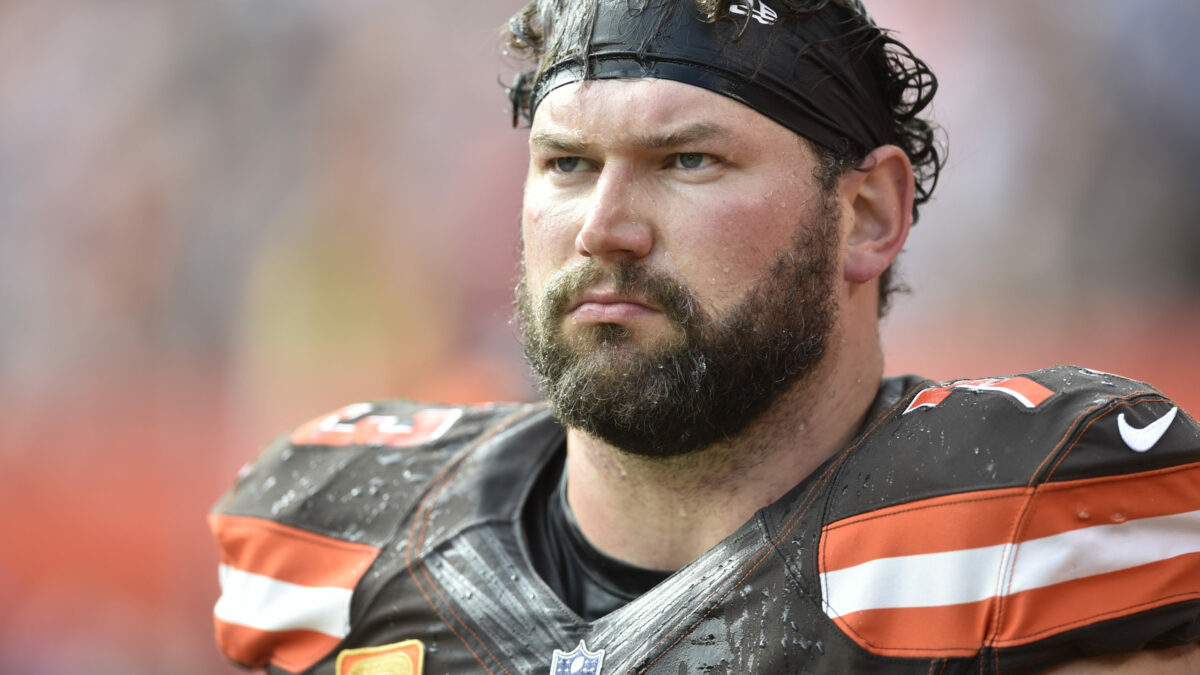 Browns Thomas a Finalist For The 2023 Hall Of Fame Class

FOR PRO FOOTBALL HALL OF FAME’S CLASS OF 2023
10 FINALISTS FROM CLASS OF 2022, 3 FIRST-YEAR ELIGIBLE PLAYERS

AMONG CANDIDATES SELECTION COMMITTEE WILL CONSIDER FOR ENSHRINEMENT

CANTON, OHIO – Fifteen former standouts in the National Football League have reached the doorstep of enshrinement into the Pro Football Hall of Fame with the announcement tonight of the Finalists in the Modern-Era Player category for the Hall’s Class of 2023.

The slate of candidates in the Modern-Era Player category will be considered when the Hall of Fame’s Selection Committee meets virtually prior to Super Bowl LVII. The Class of 2023 will be unveiled publicly Feb. 9 during the “NFL Honors presented by Invisalign” broadcast from Phoenix on NFL Network, NBC and Peacock. The players, along with their positions, years and teams are:

The Selection Committee may elect up to five Modern-Era Players for the Class of 2023; each must receive a minimum positive vote of 80 percent for election. Four others — Seniors category Finalists Chuck Howley, Joe Klecko and Ken Riley, along with Coach/Contributor Finalist Don Coryell — also are candidates for the Class of 2023. Voting on each of those four will be held individually, in conjunction with the meeting to decide which Modern-Era Players are elected.

The Finalists in the Modern-Era Player category were determined by a vote of the Hall’s Selection Committee from the list of 129 nominees named in September that was reduced to 28 Semifinalists on Nov. 22.

To be eligible for election, Modern-Era Players must have last played more than five seasons ago.

Made an immediate impact as a rookie for the Bengals – named to the 1996 All-Rookie Team (PFWA) … Possessed not only the size a tackle needed to excel, but also the speed, strength and humility, allowing him to dominate at his position … Known as a strong run blocker and resilient pass blocker during the entirety of his 13-year tenure in the NFL … Considered an elite right tackle during his career and successfully held back such NFL sack leaders as Hall of Famers John Randle, Bruce Smith, Michael Strahan and Reggie White … Blocked for nine 1,000-yard rushers, as well as Corey Dillon’s two NFL record-breaking games: 246 yards for the rookie record and 278 yards for the all-time record that stood for nearly three years … Started in 184 of his 195 career games … First-team All-Pro honors from 2004-06; second-team All-Pro in 2003 … Received All-AFC recognition in 2005 and 2006 … Voted to four consecutive Pro Bowls – the 2004, 2005, 2006 and 2007 games … Received the Ed Block Courage Award in 2004.

Multi-dimensional player who joined Bears after college career as offensive, defensive and special teams threat … Became immediate standout as return specialist, earning spot on 2006 NFL All-Rookie Team … In debut season, returned 47 punts for 600 yards (both NFL highs) and three TDs, along with 20 kickoffs for 528 yards and two touchdowns … Also returned a missed field goal that season for a 108-yard touchdown – one of only five such “kick-six” scores in an NFL game. … Opened Super Bowl XLI with 92-yard kickoff return for a touchdown – the only time in Super Bowl history that has occurred … In second NFL season, returned four kickoffs and two punts for scores, establishing an NFL record for six combined kick returns for TDs … First-team All-Pro three times (2006-07, 2010) … Member of the NFL’s All-Decade Team of the 2010s … One of two return specialists on the NFL 100 All-Time Team.

Immediate contributor to Kansas City Chiefs’ secondary with four interceptions as a rookie after collegiate career at Grambling State … Selected in third round of the 1983 NFL Draft (61st overall) … Established himself as starter entering second season and anchored left cornerback position for nearly the next decade … Picked off career-high eight passes in 1985 … Named team MVP in 1986 after totaling four interceptions and 69 tackles. … Helped Chiefs reached AFC Championship Game in final season in Kansas City (1993) with six interceptions in regular season … Played five seasons with Raiders, capping career in 1998 with lone pick-six of his career, a 74-yard return that gave him distinction as oldest player in NFL history (38 years, 26 days) to score a defensive touchdown … Career totals include 42 interceptions, 13 forced fumbles, 12.5 sacks and an NFL-record 11 blocked punts.

Outland Trophy winner as the nation’s top interior lineman and a consensus All-American following his senior season at Wisconsin … Selected third overall in the 2007 NFL Draft by the Cleveland Browns … Started at left tackle all 16 games for the Browns his rookie season, finishing second in AP Offensive Rookie of the Year voting to Minnesota’s Adrian Peterson … Known for his agility, strength and durability, he played an NFL record 10,363 consecutive snaps – a streak that ended Oct. 22, 2017, after suffering a triceps tear against the Tennessee Titans … Allowed only 30 sacks in his remarkable career, despite facing several Hall of Fame sack specialists and many team’s top pass rushers … Was the first offensive lineman in NFL history to be named to the Pro Bowl in each of his first 10 seasons … First-team All-Pro honors six seasons (2009-2011, 2013-15) and second-team All-Pro twice (2008, 2012) … Named to the NFL’s All-Decade Team of the 2010s … Well-known for his involvement in the community, he was selected as the Cleveland Browns’ Walter Payton Man of the Year three times (2010, 2012, 2016).

Entered the League in 2005 as an underdog with something to prove – started all 16 games at right outside linebacker and amassed 58 tackles and a team-best eight sacks … Led the Cowboys in sacks for eight seasons, 2005-2012 … Led the NFL with 20 sacks (2008) and 15.5 sacks (2010) …  Played on only one team with a losing record during his career and helped lead his teams to five playoff appearances … Started at weakside linebacker in the Broncos’ Super Bowl 50 victory over the Carolina Panthers, amassing three solo tackles and two assists, two sacks and four hits on the quarterback … Career stats: 138.5 sacks, intercepted three passes for 44 return yards and one touchdown and also returned two fumbles for touchdowns … Still holds the Cowboys career sacks record with 117 … Voted first-team All-Pro four times (2007-09, 2011); second-team All-Pro three times (2006, 2010, 2012) … Selected to nine Pro Bowls (2007-2013, 2015-16) … Named to the NFL’s All-Decade Team of the 2000s.

Selected in the second round, 37th overall, of the 1992 NFL Draft by the Dallas Cowboys with a pick obtained as part of the Herschel Walker trade … Earned a spot on the 1992 PFWA All-Rookie Team, appearing in all 19 games for the World Champion Cowboys … A member of three Super Bowl championship teams with Dallas (XXVII, XXVIII, XXX) … Ended his playing career as the Cowboys’ all-time leader in tackles with 1,350 … First-team All-Pro honors four seasons (1994-96, 1998) … Chosen to participate in five Pro Bowls (1994-98) … Elected to the Dallas Cowboys Ring of Honor in 2015 … Finished his 12-year NFL career with 26 interceptions, with two returned for touchdowns … Winner of the 2002 Bart Starr Award, given annually to the NFL player who serves as a positive role model to his family, teammates and community … Finalist for the Walter Payton Man of the Year Award in 2003.