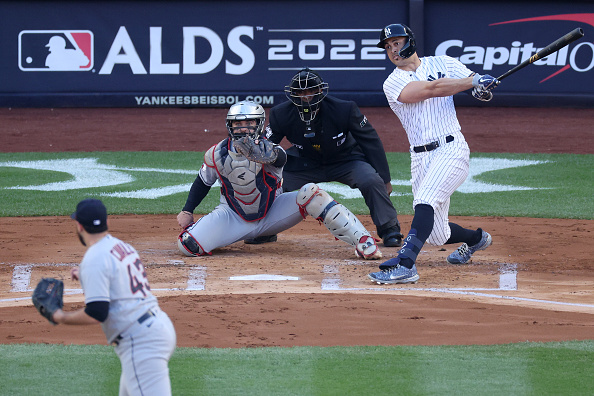 The Guardians entertaining and surprising season came to a end in game 5 of the ALDS Tuesday in the Bronx, as the Yankees out slugged Cleveland 5–1 to win the series 3 games to 2. The Yanks rallied to win the last 2 games in the best-of-5 series extending the Guardians postseason winner take all game losing streak to 8 in a row dating back to 1997. The damage was done early by New York, as Giancarlo Stanton hit a 3-run homer off of Guards starter Aaron Civale who didn’t make it out of the first inning.

Civale recorded only 1 out and took the loss. Combining the regular season and potseason, Civale was (0-3) against the Yankees this year with a 12.54 era.
Aaron Judge also hit a solo blast, as the Yankees outhomered the Guardians in the 5 game series 9 to 3.
Cleveland’s only run of the game scored on a sacrifice fly by Jose Ramirez in the third inning.
Guardians skipper Terry Francona elected not to start ace and game 2 starter, Shane Bieber on short rest in game 5. He instead went with Civale, who had never pitched in a postseason game.
Yanks manager Aaron Boone on the other hand elected to go with his game 2 starter on short rest, Nestor Cortez, and the decision proved to be the right one. Cortez threw 5 innings of 1 run ball and picked up the victory.
The Yankees now move on to the best-of-7 American League Championship Series starting tomorrow night in Houston against the Astros.