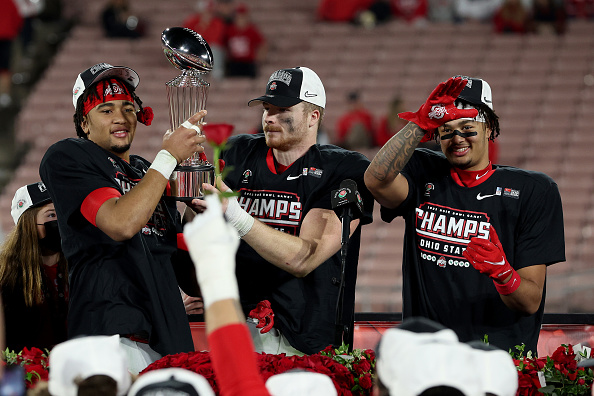 Ohio State Gets Njigba With It In Rose Bowl Win

The Ohio State Buckeyes rallied from a 14-0 first quarter deficit and a 35-21 halftime deficit and came all the way back to beat Utah in the Rose Bowl 48–45 on a Noah Ruggles 19 yard field goal with :09 seconds left.

Buckeyes quarterback C.J. Stroud also set a Rose Bowl record throwing for 573 yards and 6 touchdowns. The. 573 yards passing are the third most ever in a bowl game.

Also stepping up for the Buckeyes at the wide receiver position as starters Garrett Wilson and Chris Olave sat out the game to prepare for the NFL draft, was true freshman Marvin Harrison Jr. as he grabbed 6 passes for 71 yards and 3 scores.

And while the defense was horrific in the first half giving up 35 points to Utah, Ryan Day’s squad deserves some credit for holding the Utes to only 10 points in the second half, allowing the Buckeyes to come back and get the 3-point win.

With the victory, Ohio State finishes the season (11-2).