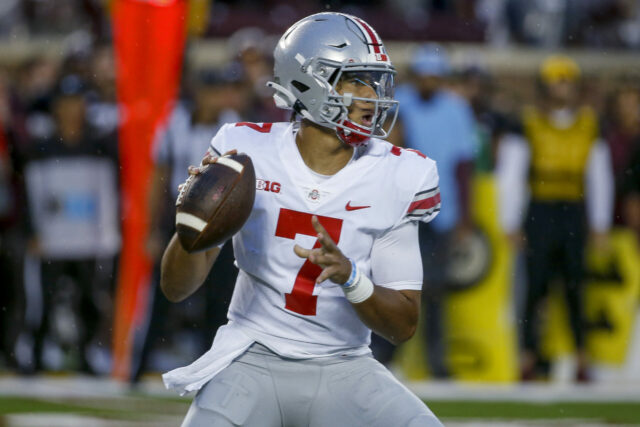 Run after run seem to throw off the Ohio State defense, who continuously tried new  combinations of linebackers and defensive backs. The Buckeyes defense got their first taste of  Mohamed Ibrahim when he busted a 56-yard run into Buckeye territory. Minnesota quarterback Trace Morgan capitalized in the red zone on Minnesota’s first scoring drive, finding  Dylan Wright for a 13-yard touchdown pass. Minnesota Intercepted a tipped pass eventually  scoring on an Ibrahim goal line run to take a 14-10 lead.

When the rain increased in the second half, so did the scoring. C.J. Stroud silenced critics by finally hitting on a deep pass, finding Chris Olave for 38 yard touchdown pass. Buckeyes  opened the half up 17-14.

After a pass interference penalty set them up nicely the Gophers went back to Ibrahim.  The result was a 19-yard touchdown run to retake the lead at 21-17.

After punts by both teams, Stroud aired it out again and found Garret Wilson for a wide  open 56 yard touchdown pass. A one play scoring drive for Ohio State to take a 24-17 lead. Not  long after the defense joined the party with a strip sack by Zach Harrison that Haskell Garrett returned for a touchdown. The touchdown cemented a 21-7 scoring difference in the third quarter and put the buckeyes up 31-21 heading into the Fourth.

After a Minnesota field goal, Ohio State found success in another freshman running  back. TreVeyon Henderson took a screen pass 70 yards for a touchdown, emphasizing the  Buckeye lead at 38-24.

Minnesota fought an injury to Ibrahim and a ticking clock to keep the game close. Trace  Morgan found Tanner Jackson on a. 22 yard pass, the Gophers ran it in to cut the lead down to  38-31 Ohio State.

It took the Buckeyes two plays to respond. After a first down run by Miyan Williams,  Chris Olave came back into the picture. Stroud found Olave on a 61-yard catch and run  touchdown pass. That was the final score of the game as Ohio State battled through a messy  first half on the road to start the season 1-0.

Ohio State performed about as expected. C.J Stroud struggled to start but finished the  day 13/22, 294 yards, four touchdowns, and an interception. By keeping Stroud in for every  snap, It’s clear Ryan Day wants to avoid quarterback controversy. Chris Olave had two  touchdowns and both freshman running backs added scores of their own. Olave, Henderson,

Williams, and Garett Wilson are name fans will be hearing all years long on offense. Even with a  slow start, it’s clear the offense is the main event on this team.

The couple big stops and strip sack touchdown were impressive, but the Ohio State defense has a long way to go. Similar problems from last year such as poor run defense and  lackadaisical one on one coverage have re-appeared. No surprise that the defense won’t be the  Buckeye’s crown jewel.

There is work to be done everywhere. Minnesota is improved from last year but is still a  middle of the pack Big Ten team. When Ohio State returns home next week to face #11 Oregon,  a sloppy first half and mediocre defense may not result in a win.