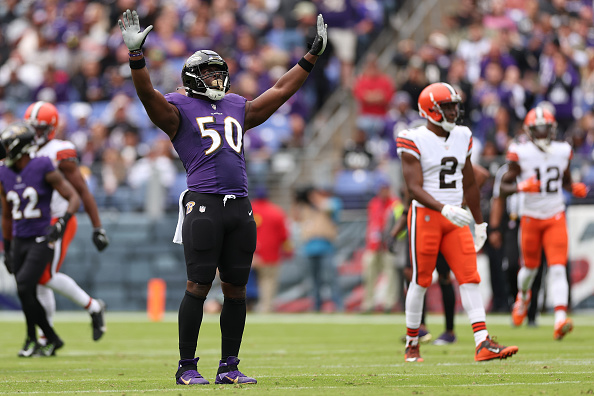 The Browns lost their fourth game in a row on Sunday at Baltimore to the Ravens 23–20.

With the loss, Cleveland falls to (2-5) on the year, while Ravens improved to (4-3) this season and are tied for first place in the AFC North.
Cleveland jumped out to leads of 7-0 and 10-3 in the first quarter, but the Birds scored 17 straight points to take a 20-10 lead in the third quarter.
Baltimore would lead again by 10 points in the fourth quarter at  23-13 and held on, as the Browns comeback fell short when Cade York‘s 60 yard field goal to tie the game was partially blocked with 1:59 left.
Nick Chubb led the Browns offense with 16 carries for 91 yards and a touchdown. Kareem Hunt scored Cleveland’s other touchdown on a 2 yard run.
Jacoby Brissett was 22 for 27 passing for 258 yards, no touchdowns and no interceptions. But the Browns quarterback was sacked 5 times and fumbled once.
While the Browns defense kept Ravens quarterback Lamar Jackson in check with no rushing touchdowns or passing touchdowns, Baltimore was able to run for 160 yards as a team and 2 scores.
The difference in the game, Baltimore‘s kicker, Justin Tucker was perfect on the day as he nailed 3 of 3 field goals with a long of 55 yards.
Browns rookie Cade York, with that field goal miss from 60 yards, ended up 2 of 3  on the day.
Next up for the Browns, a Monday night home game on Halloween against the first place (4-3) Cincinnati Bengals.