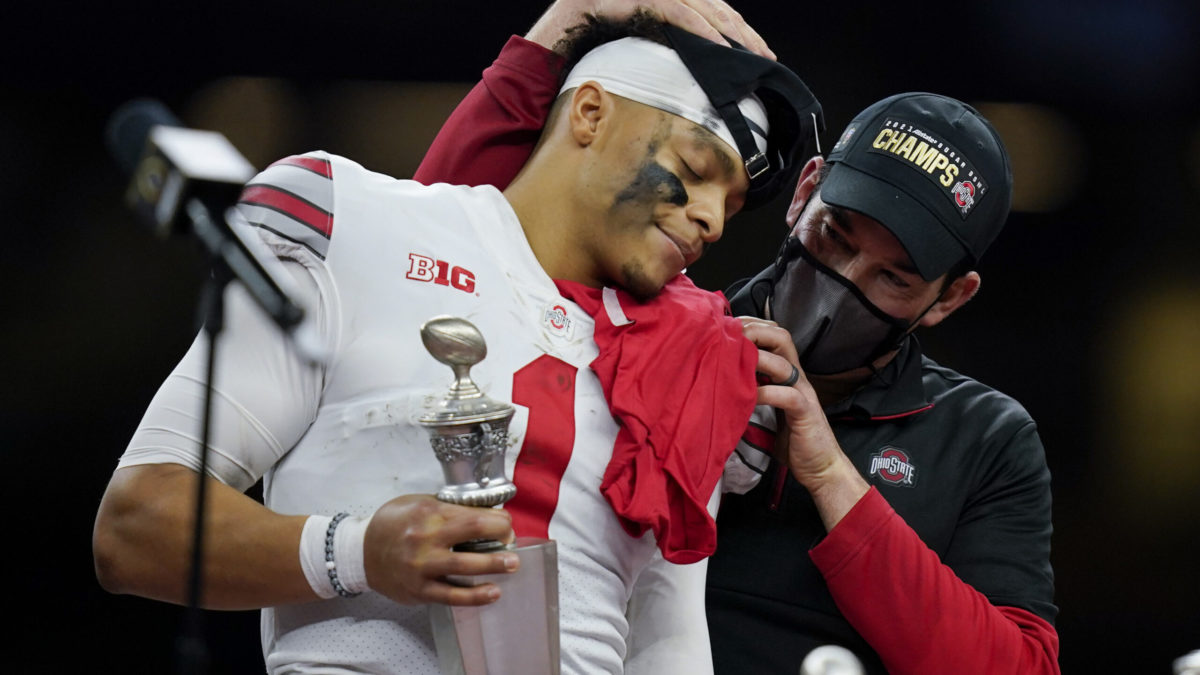 Sweet Thoughts From The Sugar Bowl

Buckeyes On A Roll

After being down 14-7 in the 1st quarter, Ohio State scored 28 unanswered points and actually scored on 5 straight offensive possessions in the first half to take a 35-14 lead into the locker room at halftime.

Ohio State Quarterback Justin Fields played his greatest game as a Buckeye in the 49-28 win over Clemson throwing for 385 yards and a Sugar Bowl record 6 touchdowns, while also rushing for 42 yards for 427 yards of total offense. The 6 td passes in one game tied an Ohio State school record.

Ohio State running back Trey Sermon has rushed for 524 yards and 2 touchdowns in the Buckeyes last two games, both big wins. He set a school record with 331 yards against Northwestern in the Big Ten Championship game and then added 193 yards against Clemson in the Sugar Bowl.   The 524 yards rushing against the Wildcats and Tigers is the best 2 game total in OSU history!

The 49-28 victory over Clemson was Ohio State‘s first ever win over the Tigers. Coming into the Sugar Bowl OSU was (0-4) versus Clemson all-time.

Chris Olave’s first touchdown catch in the second quarter, on the play where Justin Fields returned after his rib injury, was the identical play that Alabama used against Notre Dame in the Rose Bowl with Mac Jones hitting DeVonta Smith for a TD, throwing it to the front pylon for the score.

It’s Déjà Vu All Over Again

Clemson Linebacker, James Skalski, in his last two College Football Playoff games has been ejected for targeting. It happened in the National Championship game last year against LSU and then again in the Sugar Bowl this year against Ohio State.

Both head coaches, Alabama’s Nick Saban and Ohio State’s Ryan Day contracted the Coronavirus during the season and recovered from it and will coach against each other on January 11th in the National Championship game in Miami at 8pm on ESPN.

Clemson head coach Dabo Swinney ranked Ohio State 11th in his final regular season coaches poll and that provided the Buckeyes with some extra motivation. While Alabama head coach Nick Saban didn’t rank the Buckeyes outside of the Top 10 in his final coaches poll, he did rank them outside of the Top 4, meaning he didn’t think they were worthy of playing in the College Football Playoff either. You have to think that Ryan Day and the Ohio State players will again use that as motivation along with already being listed a 7 point underdog in the title game. Just an interesting fact courtesy of ESPN, since 2012, when the Buckeyes are listed as an underdog, they are (8-1) in those games.