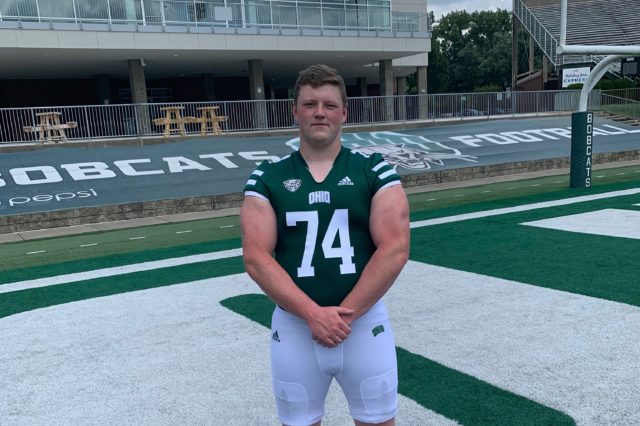 The On Campus Report: Luke Vannest

ATHENS (News Talk 1480 WHBC) – For most of his life, former Hoover Viking Luke Vannest has been a pretty big deal. Standing at 6’4 and weighing in at 315 pounds, the 2018 first team All-State offensive lineman was able to create a huge impact for North Canton last year, helping the Vikings average 34.7 points and 400 yards per game during his senior season. That type of large contribution allowed Hoover to win a share of the Federal League title in 2018, the school’s first since 2008.

However, at the next level, Vannest is one of many players who have a high caliber high school resume. The freshman linemen for Ohio University is learning that it will take time for him to leave a sizable impression.

Competition is much stiffer at the division one level. This fall Vannest will be competing in a way that he isn’t necessarily familiar with. Rather than going head to head against opponents, Vannest will be redshirting for the 2018 season, making his teammates the only players he will be facing this year.

“I’m going to try to see this as a learning experience,” said Vannest. “Even to be on the field, even if it is just on the sideline, with these players, it’s such a unique experience that not many people get to have. I really want to take advantage of that and learn as much as I can.”

While film and practice will be valuable to the former Hoover standout, Vannest says he believes the best supply of knowledge can be found in the guys ahead of him on the depth chart.

“You have to look at the older guys who have been here longer as a resource,” said Vannest. “You have to learn about their experience here. They know what it takes; the work ethic and the mental fitness to be fully prepared when the season comes to play at your best.”

Although he might not be on the field for Ohio this year, it would be a safe bet to assume Vannest will become an impact player for the Bobcats in years to come. His size combined with his knowledge of the game should allow him to develop into a reliable protector up front… similar to what he was in his days when he wore an orange and black jersey.

Check out the full interview with Luke Vannest by clicking the video below!