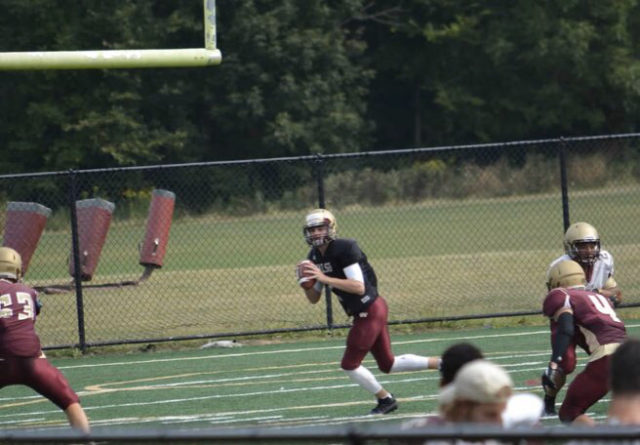 The On Campus Report: Riley James

NORTH CANTON (News Talk 1480 WHBC) – Despite the constant amount of changes that have taken place throughout the past year for Riley James, the former Canton South gridiron star has seemingly found a path to stability at the next level.

During his career as a Wildcat, James was all over the field. He played on both sides of the ball, along with some special teams. At times he was running the offense as the quarterback. In other instances, he was making plays downfield as a dynamic pass catcher.

He was there to simply help in any way that he was needed, which is indeed what he did. James stuffed stat sheets at Canton South, finishing his high school career with 2,345 total yards, 86 completions, 13 touchdowns, 34 receptions and 104 tackles.

At the next level with Walsh, James’ responsibilities have been limited to from everything to one specific thing: playing the most difficult position in sports, quarterback.

“It was a little bit of a culture shock at first,” said James, who was recruited as a receiver out of high school. “On the first day they told me they re-watched my tape and really liked what I can do at quarterback. They thought I had a better opportunity to compete there in the next few years.”

James, who worked out all summer expecting to be a receiver for the Cavaliers, says originally, the idea to play quarterback in college was something he wasn’t completely in on.

“At first I was a little skeptical about it,” said James. “I wasn’t sure if I wanted to be a quarterback at the college level. But now, I have a full time quarterback position coach. I think I am adjusting really well to our offense. I am really happy with where I am right now.”

Currently, James is a red-shirt. The Walsh coaching staff believed that his raw athletic ability would be best served with a year of downtime to simply learn the new offense. While he says it is weird not competing against other teams this fall, James is making the most out of his situation.

James continued saying, “Playing quarterback is 75% mental. In high school I was basically playing the position because I had a good arm. I didn’t have technique, I didn’t know how to read the defense. Now I am working on everything, everyday with myself and my coach. He is explaining the reads step by step. On the field we are working on footwork.”

As James continues to develop, he should serve as an exciting addition to the Walsh offense next year, something the team is in need of. The Cavaliers have scored just two touchdowns in their four games this season. They approach their first contest in October still searching for their first win.

While it would be understandable for one to be discouraged by their team’s struggles, James is using the Cavs’ poor start as a learning opportunity.

“I am learning that you are going to face adversity,” said James. “Whenever adversity strikes, you have to strike back and work as hard as you can to get to the point of where you want to be.”

The path of where James wants to be is now a clear one. He has the tools to help him along the journey. Now, all that’s left is continuing to deliver when called upon, just like he did during his days at Canton South.