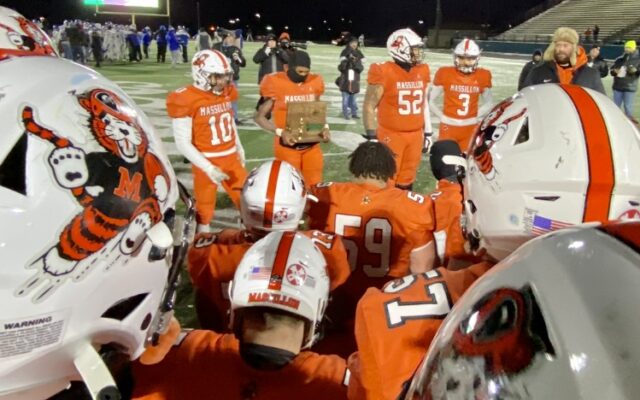 The Significance Of The 2022 Massillon Tigers Football Season

It’s undeniable that the 2022 Massillon Tigers football season was significant. From individual accomplishments of players and coaches to their deep run in the playoffs, the Tigers had a season to remember. While Massillon fell short of their ultimate goal of winning another state championship, what they did on the field was impressive and deserves to be celebrated.

For decades, no head coach of the Massillon Tigers was able to get over the bar of 80 wins that the legendary Paul Brown set. In 2022, Nate Moore raised that bar and surpassed Brown with 83 wins. Moore is only the 3rd coach to make it to an 8th season with the team and some fans in Stark County were surprised to see him given the chance to dethrone Brown as Massillon’s winningest coach. Brown’s legacy is sacred to Tiger fans, so many thought the program would never allow the record to be passed. Moore has remained humble about the accomplishment and credits his players for the success.

Proud of the 2022 Massillon Tigers. Love this team. Love our guys. Thank you class of 2023. Massillon always. #TIG

Willtrell Hartson ended his time as a Tiger by putting himself in the record books with the single season rushing record. Hartson ran for over 2,000 yards over the course of 14 games and usurped his running back coach Travis McGuire’s previous record. He has next level talent and there will be no shortage of offers coming his way.

What A great 3 years,Thankful for my teammates and coaches and S/O to Tiger Nation for all the Support and everyone who assisted me throughout my Journey. Once A Tiger Always A Tiger

The Tigers developed for the future

The 2022 Massillon Tigers football team is graduating significant talent, but sophomore Jalen Slaughter has shown he is the present and the future. Many doubted putting such a young player in such a prominent role, but Slaughter stepped up to the challenge. His confidence is only growing and marque wins over the Canton McKinley Bulldogs and St. Ed’s Eagles only bolstered the belief in Tiger Town that Slaughter is the man for the job. Other notable talent returning next year for the Tigers include Cody Fair, Chase Bond, Braylyn Toles, Nolan Davenport and Brandon Carman.

Today I just thank GOD for the gift of life & a new chapter. No complaints , no requests just beyond blessed and thankful to b alive !