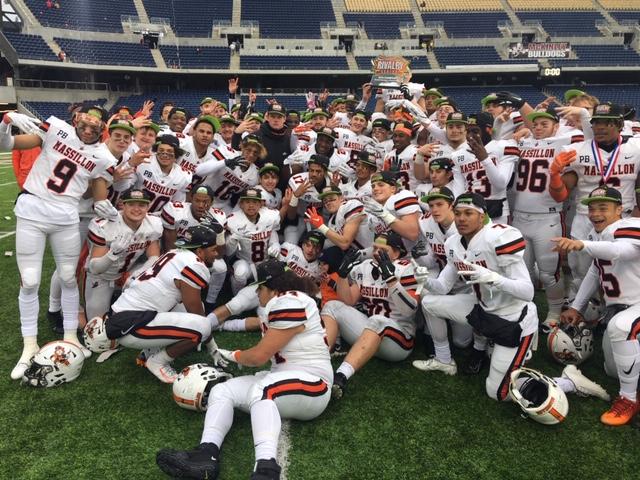 The Massillon Tigers rallied from a 14-10 deficit late in the third quarter to defeat McKinley 24-14 thanks to a pair of big plays in the 130th meeting between the two arch rivals.

The first big play was a 63 yard touchdown run by Terrance Keys Jr. that put Massillon up 17-14 near the end of the third quarter.

The second, came on a perfectly thrown ball by Tigers quarterback Aidan Longwell to Jayden Ballard for 79 yards with under two minutes to play in the fourth quarter.

Keys finished the game with with 141 yards on 21 carries and the one score. For his efforts was named the Sarchione Ford MVP of the game.

Ballard reached the end zone twice on passes from Longwell and totaled 114 yards on 9 catches.

Longwell, who was injured slightly in the 2nd quarter, came back in and finished the game throwing for 206 yards, those 2 touchdowns and 2 interceptions.

The 10 point victory made it 4 straight for Massillon over the Pups.

With the win, the Tigers finished the regular season at (10-0) and will host a first round playoff game against Warren Harding.

Lemeir Garrett led the Bulldogs with 159 yards on 25 carries and one touchdown.

With the loss, the Bulldogs fell to (8-2), but even with the “L”, McKinley still qualified for the OHSAA Playoffs, and they too will host a first round game, with the likely opponent being Solon.