Transfers, trials, tribulations and tournament time. This is the story of the 2019-2020 GlenOak Lady Eagles basketball team.

GlenOak made it to the final four last season and lost to Cincinnati Mount Notre Dame in the State Semi-Final. After the season, the feeling was that the team would be going back to Columbus this season. They returned just about every major piece of the team from last season. Then after a long and tumultuous Summer, almost everything changed.

I won’t tell this entire story because it is very complicated. It is very intricate and has many moving pieces and parts. I could throw some people under the bus in this section by telling the full story, but I have decided not to. I will simply report the facts.

Here’s what you need to know.

To further embellish, I will add this: Some will say it started in the youth program, but do not know or understand Wackerly’s side of the story. Coach decided to take the high road and be an example for his players. He did not want to see hate become part of his character or their character.

Wackerly’s side of the story has been supported by a seven week investigation, by the school board (it was a unanimous 5-0 vote), the OHSAA and Stark County Court. These are the facts.

This did not bother the team, it made them hungrier, it focused them even more. It was tough on Wackerly. He spent lots of time thinking about it and I know personally that it bothered him. There were many challenging days for Wackerly, but he persevered and so did the team.

I will now tell five other stories that are indicative of who this team is and what they have become.

GlenOak split their season series with McKinley, winning the first meeting and losing the second. In the second meeting, McKinley needed a win and played an inspired game on the road. In that game, the Eagles sophomore point guard Breezie Williams had ten turnovers.

Following the loss, Breezie took it upon herself to text the entire team apologizing for her effort. It showed leadership and made everyone on the team realize who she was and what she could become. Coach Wackerly said she was like the quarterback of the team after this extremely mature act.

GlenOak made it to the District Final at Perry with this starting five. They defeated Hoover in that game 63-38. After the game, coach Wackerly told me that this was the greatest feat of his coaching career. Wackerly said he was speechless and was struggling to find words to describe his emotions. I walked up to him right after the win on the floor and I said “Where has this been all year?” he responded by saying that they “took the cap off.”

Wackerly’s quote really cracked me up. It’s part of a long list of quotes he has given me that are just like this. I once stated to my broadcast partner Bob Jeffreys during the season that Wackerly was playing chess and everyone else was trying to master checkers. 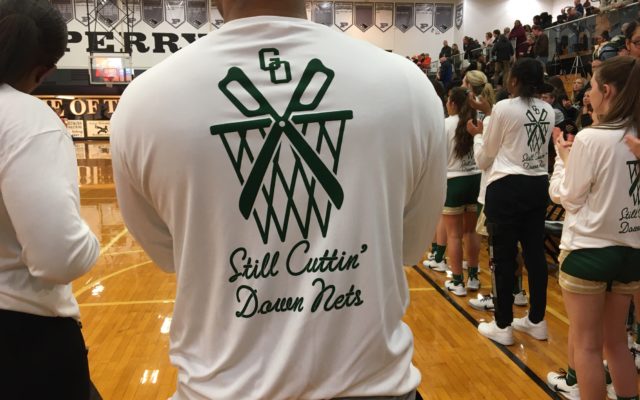 Jackson won the Federal League crown this season — Coach Anthony Butch and his girls deserve a huge congratulations for doing something that hadn’t been done at Jackson since 1978.

The game that clinched a share of the title for Jackson was at GlenOak. The Polar Bears dominated the game and won 39-26. GlenOak struggled to get off shots and execute a game plan during this loss.

After the game, I spoke to coach Butch and Jackson senior Rachel Stran on the broadcast. They were elated to have a share of the league crown.

It was senior night at GlenOak, so coach Wackerly went upstairs to celebrate with Green, Lemire, Vance and their families despite the loss. After he was done, he came down to the floor as we were tearing down our equipment and I knew I was going to say something to him.

I said something about the game being a tough loss and he looked at me, laughed, pointed at the scoreboard and said “yeah, but I like that we held them to just 39 points.” He was not thinking about winning this game at that moment. Wackerly has always told me that the regular season is 22 scrimmages to get ready for the postseason. This attitude and mindset was on full display after a 13 point loss to Jackson in a key league game.

Story number four: The team without an identity.

A week ago, I spoke to Kenzie Green, coach Wackerly, Lemire and Vance. During the interview, Green said that the team was basically missing an identity until the postseason. Wackerly told me a few days ago that they went through a different offense every week during the middle of the season.

They waited a very long time to settle on something that worked, but it dawned on Wackerly that in order to win, his sophomore starters had to come to life. After the end of the regular season, GlenOak had almost two weeks off until the postseason. It was during this time that Jordan Weir became Jordan Weir.

Weir’s footwork, ability and overall confidence went through the roof. Lemire told me that her talking to the rest of the team was a huge sign of how much she had grown from the beginning of the season.

Wackerly predicted to his son Bret before their 78-64 win over Akron Kenmore-Garfield in the Sectional Final that Jordan would have a big game (21 points, nine rebounds and a force). He was right.

A new identity was born and the team was rejuvenated by the win, the offensive efficiency and the firepower that had been unlocked. Wackerly knew all year what his seniors were going to give him. Now he feels comfortable knowing what his sophomores are giving him each time out as well.

Wackerly told me a few days ago that the key to winning and going back to Columbus was learning how to handle success. After the District Title win, he posed this question to his team: “Can you mentally erase last Friday?” He said the team was not done yet, he told the parents to not let the kids arrive and they haven’t.

I feel the success of this season has already been defined by the fact that this team was constantly written off and now they continue to defy logic. Vance, a senior, said to me about one week ago that this has been the best season yet. Despite the distractions, the transfers, the tribulations, the trials and so much more.

I’m not trying to write an endorsement for GlenOak girls basketball. I am trying to show the brilliance of a great coach, the hard work and determination of his players and their willingness to battle through true adversity. Wackerly is a special coach and this is a special team.

Wackerly told me that he has never received the texts, calls and congratulations that he has this year. More people have reached out than ever before — 300 texts, tons of calls and tons of people who don’t even know him have reached out. Wackerly and Mama (Jean) Wackerly his wife have been overwhelmed by the support, but they absolutely love it.

Wackerly wants this season to continue for the kids. He wants the seniors who stuck around this season to get back to Columbus to prove everyone wrong. They are one step away.