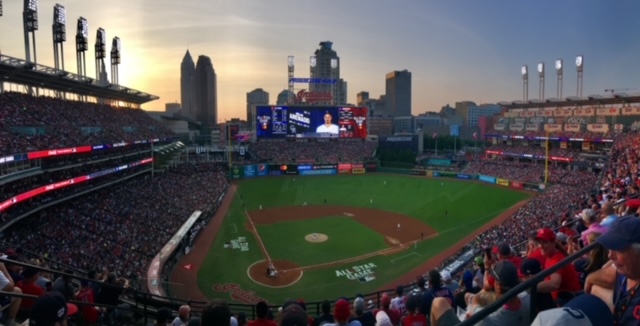 Fans will get their first look at the extended netting that was installed prior to the 2020 season. The new netting extends down both foul lines, going to section 128 in the Right Field corner and to section 174 in the Left Field corner. The net height was extended from 23 feet to 33 feet and the canopy was removed behind home plate, allowing for foul balls to once again reach fans in the lower bowl.

The Cleveland Indians partnered with the Cleveland Clinic to implement new ballpark health and safety protocols to start the 2021 season.

All fans will be required to wear a CDC recommended face mask at all times while in the ballpark unless they are actively eating or drinking in ticketed seats. Additionally, no bags will be allowed to speed up ballpark entry with exceptions being made for medical bags, diaper bags and clutch purses. Progressive Field patrons will see an increase in hand sanitizer stations around the ballpark and Cleveland Clinic’s S-A-F-E branding and signage to remind fans of ballpark health guidelines.

Fans can learn more about 2021 health and safety policies at www.indians.com/updates.

New to Progressive Field this season, all tickets will be exclusively mobile entry. Fans will be able to access and manage their tickets via the Ballpark app, My Indians Tickets account or the StubHub app. Screenshots and PDFs will no longer be acceptable forms of entry.

The Lexus Home Plate Boxes offer a private location with premium seating directly behind home plate. The boxes offer an exceptional view and come with a unique menu, drink rails, balcony heaters, TV and your own attendant.

Due to releasing and selling tickets by month, the Indians organization is taking a different approach this year to announce the promotional calendar and special ticket packages on a monthly basis.

For the month of April, all fans attending games April 9-11 will receive a 2021 Season Magnet Schedule presented by Progressive.

This season will also be highlighted by post-game fireworks for select dates, bobbleheads for Roberto Perez and Shane Bieber, a Franmil Reyes jersey giveaway and much more.

Updates to the schedule will be posted on Indians.com prior to the Season Ticket

Holder opt-in window for each impacted month. Please visit www.Indians.com/promotions and Indians.com/specials for the most up-to-date information.

Prior to the 2020 season, two new escalators were installed at Progressive Field (RF District, Infield District) as part of Gateway capital improvements.

CASHLESS ENCOURAGED: We strongly encourage fans to go cashless at all food and retail locations to support everyone’s health and safety.

PERRY’S ICE CREAM: Cleveland Indians partner Perry’s Ice Cream debuted its new ice cream flavor with a home run theme, “Doughing, Doughing, Gone!TM”, this spring. The premium ice cream flavor is made up of chocolate cookie dough ice cream with crushed cookie swirls and cookie dough pieces. The flavor will be available for purchase at Progressive Field all season long and can also be found at local retailers, including your local grocery store and ice cream stands in Ohio, Pennsylvania and New York. With every purchase of Doughing, Doughing, Gone!TM, a portion will be donated to Cleveland Indians Charities.

Perry’s will have a Progressive Field ice cream stand at section 138.

TERRACE CLUB: Due to health and safety protocols the Terrace Club will be closed to start the season for all fans.

The Indians will add four new player programs this year and continue supporting Friends of Francona, working closely with the VA Medical Center to provide experiences with Terry Francona.

The Cleveland Indians are proud to announce the following partner news for the 2021 season: