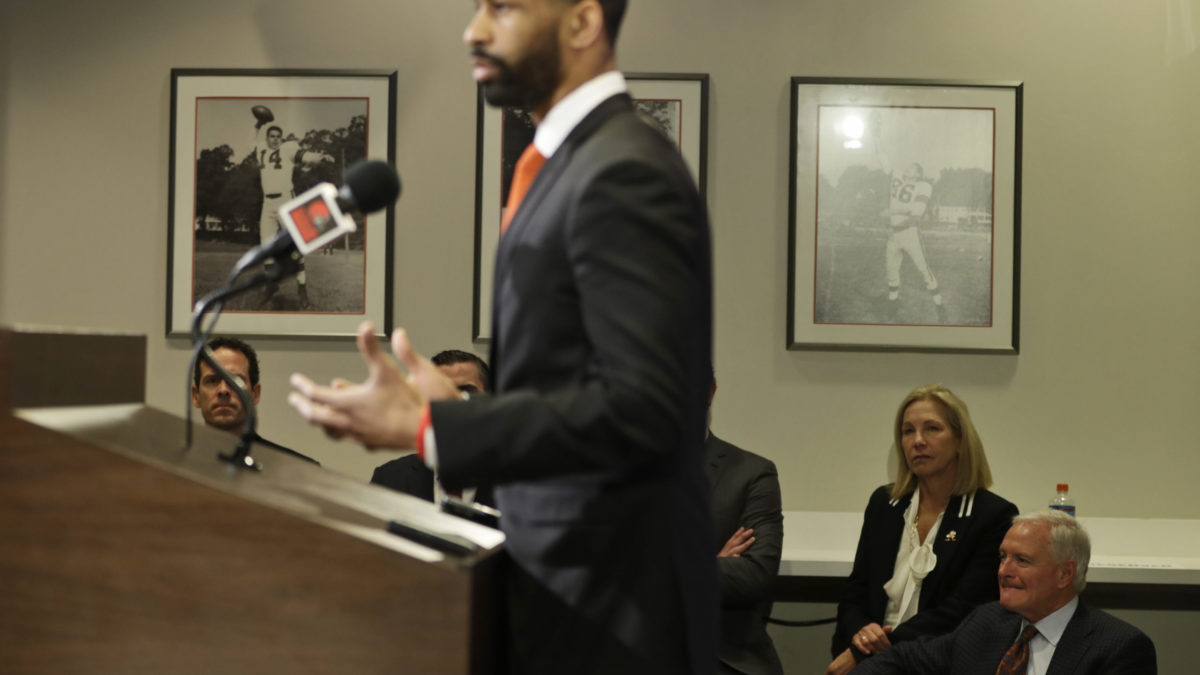 The following are new, full-time additions to the staff.

The following 20 have taken on new roles after their respective promotions and title changes.

“I am excited about the group,” Berry said. “It was a very long process because we were diligent about a number of not only the senior-level positions but even entry-level positions. We did a lot of reference work. We did a pretty rigorous interview process and then obviously the work samples is really important for everybody that we would bring on board.

“I am excited because I think we have brought a lot of smart, talented people and put them in key roles. But also, everyone is not a carbon copy of one another – they bring different perspectives, different experiences, different viewpoints and that is what is going to push us to better decision making. We really are going to consider all the different perspectives and value them. That was a specific aiming point because I think that just helps us to be a better higher quality football operation. I think that is something that we took big strides in accomplishing this month.”

Adofo-Mensah comes to Cleveland after spending the past seven years with the San Francisco 49ers. He was elevated to his most recent role, Director of Football Research and Development, in May 2018, after serving as a Manager of Football Research and Development. With the Browns, Adofo-Mensah will work closely with Berry and the rest of the senior football staff to contribute to all roster and strategy decisions. He will also assist Berry with the day-to-day operations of the department.

“I think he brings a nice blend of both an insider and an outsider perspective to football,” Berry said. “I think probably the best part of him is just the person. He is humble, high integrity, a continuous learner, true growth mindset and he has fantastic interpersonal and people skills — in terms of someone who can be both a strategic thought partner with all the big decisions that we make, someone who has the capacity to be an outstanding manager as he helps run the day-to-day of the team, and then just someone who is going to get along with the really strong group that we have already. I think he is really a perfect fit to add to the mix.”

Before entering the NFL, Adofo-Mensah was an Associate Portfolio Manager at Taylor Woods Capital and a VP/Executive Director at Credit Suisse as a commodities trader. Adofo-Mensah played basketball at Princeton, where he graduated with a bachelor’s degree in economics. He received his master’s in economics from Stanford.

“I came into San Francisco and was a clean slate and I got my football foundation put in by so many; Ed Donatell, Vic Fangio, Tom Gamble, Ethan Waugh, Ran Carthon, Tom Rathman and Bobby Turner, Kyle Shanahan, Mike Shanahan, Eric Mangini, Jason Tarver, Martin Mayhew and John Lynch. My football foundation has been put in by some of the greats and all I’ve done is try to learn and see the intuition put into it. I’m not the guy who’s going to tell a traditional scout a trait is wrong or something like that. I know enough to ask good questions and see how we can get better information and make a good decision.

“Having been at the 49ers for a long time and especially these last few years, you see the benefits of working in an aligned culture. What Cleveland has been building for the last few years to this point of a completely aligned culture, I was really excited to come join that. Winning in a place like this would be something incredible where people care. They care about football on Sundays entirely on a level that’s just inspiring. To come to a place and potentially be able to win, it was an opportunity I couldn’t pass up.”

Grigson spent the past four months with the Browns in an advisory role. He returns to Cleveland — where he served as a Senior Personnel Executive in 2017 — after working with the Seattle Seahawks as a Senior Personnel Consultant for the past two seasons. Grigson was the Colts’ General Manager from 2012-16, a stretch that saw the team advance to the playoffs and win 11 games in three consecutive seasons.

“I’m just really, really grateful,” Grigson said. “From the Haslam family on down. Everyone has been so open and collaborative and everybody has their own niche but they kind of just come together. It was neat to see them come together in the process leading up to the draft.

“I’ve told them I’m an open book and they’re welcome to bounce things off me — and I know they’re very open to that — just through things I’ve learned, the wisdom gained and trial and error, victories, mistakes, successes. I feel like I have an experienced background and I’ve been fortunate the vast majority of it has been with winning programs. I figure I can help in that aspect because I kind of know what it looks like. Whatever Andrew sees fit that I need to do to help us where we want to go, that’s what I’ll do.”

Berry and Grigson, of course, have a relationship that dates back to Grigson’s tenure with the Colts. Berry was elevated from pro scout to pro scouting coordinator in Grigson’s first season at the helm.

“We obviously have a long-time relationship. He was one of the first people to make a significant bet on me early in my career. That is not the reason that he is here,” Berry said, “He is here because I think he is very good. He has a very established track record as a personnel evaluator from his time in St. Louis at the time, Philly and then obviously, Indianapolis. General Manager experience, rebuilt the Colts into a winner very quickly, Executive of the Year. And that is something that is valuable to me.”

Cook has been with the Browns since 2016, when he was hired as the Assistant Director of Scouting — a position that provided responsibilities in pro scouting, college scouting and scouting research. In his new role, Cook will contribute to all football and strategy decisions along with the senior staff while also leading the day-to-day operations of the player personnel department.

“One thing I’ve been fortunate is to be around a lot of good people, a lot of good football intelligence and knowledge,” Cook said. “I’ve been fortunate to have a diverse set of experiences. Throughout my time in the league, I’ve worked in pro scouting, college scouting. When I came to Cleveland, I had an opportunity to take on a leadership role, experience the administrative piece, grow in cap management, grow across football operations. It’s really been a nice trajectory in terms of my growth and experience since I’ve been in the league.”

Cook came to Cleveland after a four-year tenure as a scout with the Green Bay Packers. Cook was a linebacker at the University of Miami from 2004-08 and was a graduate assistant for the Hurricanes before taking his first NFL job with the Colts in 2011.

“He is a guy who has done pro, he has done college, has a really good understanding of research, his learning contracts. I just think he has a broad skill set,” Berry said. “He is a talented evaluator and he has got really great people skills. I think he will work well, not only managing our scouts but also our scouting research function, which is really a hybrid area between traditional evaluation and research and strategy and I think that is really important for the person that is going to run day-to-day personnel within the organization.”

Kovash has been with the Browns since 2013, when he joined the team as the Director of Football Research, and most recently served as Vice President of Player Personnel. In his new role, Kovash will assist Berry and the senior football staff on all roster and strategic football decisions while also focusing on roster strategy, player personnel process, football innovation and professional development across all of football operations.

Healy has been in Cleveland since 2016, when he joined the team as a Senior Player Personnel Strategist. On top of his role as a contributing member of the senior football staff, Healy, who joined the Browns after serving as a professor of economics at Loyola Marymount University, will lead the integration process of data and advanced insights into all realms of football operations.

“I feel fortunate that I had a couple of years of first-hand knowledge on the track record with a number of our employees in football operations,” Berry said. “I think it can be challenging when you have transitions, turnovers, a lot has been the case here when someone new comes in, they really get a 90-day sample and they may not appreciate what is already on hand. We have a number of really talented people across football operations already. I very much believe in promoting from within. That does not mean that we are not going to have external hires, in fact we have this cycle and I think that is healthy. But I know that we have really good people on hand and am excited to give them an opportunity.

“Quite frankly, I thought they did a really nice job this spring and am looking forward to seeing what they can do moving forward.”