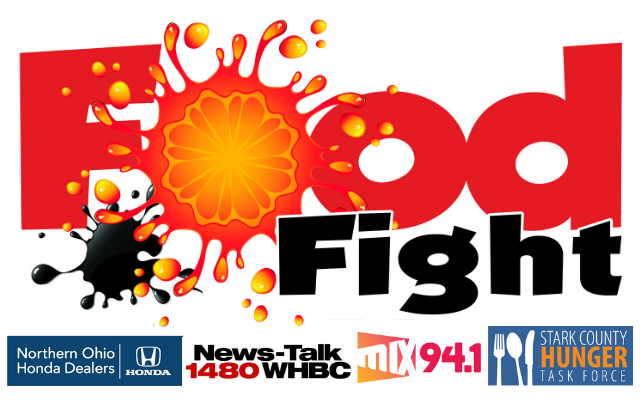 In this fight, we all win!

Here’s the history of this event …

Who will collect the most food to benefit the Stark County Hunger Task Force?  Who will win Food Fight 2018?

Will it be a repeat?  Will it be an upset?  Thousands and thousands of Stark County residents are hungry!  One in four children do not know where their next meal may come from!  Be true to your school and help win the fight against hunger.

The high school collecting the most meals/pounds will receive on-air bragging rights on Mix 94.1 and News-Talk 1480 WHBC plus a traveling trophy!

Get your spirit on!  It’s a Finale Rally!  The last day to collect!  Join us and reps from each school and drop off money or non-parishable donations to us live @ the following Dunkin’ Donuts locations:

Join us for a full day of red-black-orange-black spirit!

Pregame Party / 8am-11am
Join the 1480 Join WHBC Sports guys including Kenny Roda, Joe Palmisano & Jon Bozeka for a pre-game celebration party!  Check back as we will be announcing the location soon!

News-Talk 1480 WHBC will broadcast the big game!  WHBC’s Pam Cook & Gary Rivers and Mix 941’s Ike & Sarah will be on field with the 2018 Food Fight winner announcement and trophy ceremony!

GO PUPS!  GO TIGERS!  IN THIS FIGHT, EVERYBODY WINS!

You can also mail your donation to: Stark County Hunger Task Force, PO Box 20941, Canton, OH 44701.  To donate online (and for more information about SCHTF), click the SCHTF logo above.