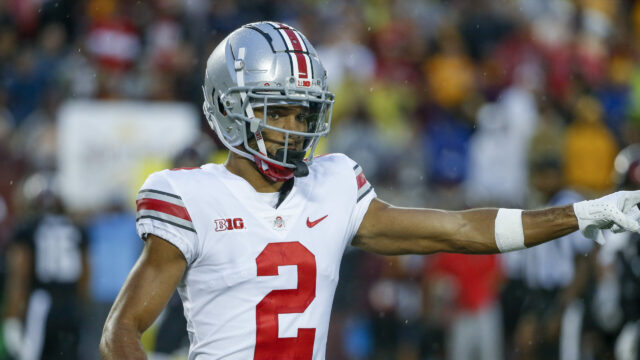 Can the Buckeyes Bounce Back Against Tulsa? by Billy Beebe

This past week has been hard for the Buckeyes. Their first loss of the year, a drop in the AP Poll, and scrutiny all around. A home matchup against Tulsa may be exactly what Ohio State needs to collect themselves and get the season back on track. Sitting at #9 in the AP Poll, the Buckeyes still have  their eyes set on a College Football Playoff appearance. Before a big run, they’ll need to start with Saturday

It’s been a tough start for the Tulsa Golden Hurricane and their schedule this season doesn’t offer much relief. After an odd 19-17 loss to UC Davis, the Golden Hurricane saw Oklahoma State last week and extended their losing streak to Power Five Schools to 14. Ohio State is one of three big matchups for Tulsa this season, heading to Columbus Saturday and #9 Cincinnati later in the season.

This is the perfect opportunity for the Ohio State defense to clear their good name. Tulsa quarterback Davis Brin is inexperienced, inconsistent, and winless this season. After seeing two Senior quarterbacks, the Buckeyes will catch a break with a Redshirt Junior with one win under his belt. The one strength for Tulsa offensively  is their receiving core which helped take them to the AAC championship in 2020. Despite the experience, it seems the same group of receivers are struggling with a new quarterback. Combine the listed issues, to a less talented offensive line, and a mediocre run game. A struggling Buckeye Defense should be able to gain confidence at every level, which is much needed.

The Tulsa defense has two solid performances to start the season. Both opponents kept under 25, four fumbles, an interception, and three sacks. Despite the decent start, State’s receivers should have a big day. Tulsa is attempting to replace two corners last left via transfer. Trying to stop a Buckeyes receiving core that had three receivers over the century mark last week, will be on Head Coach Philip Mongomery’s mind all day.

Part three of the C.J. Stroud movie will be interesting to watch. While Oklahoma State’s Spencer Sanders struggled, UC Davis quarterback Hunter Rodrigues threw  for an efficient 311 yards and a touchdown against Tulsa in week one.Tulsa’s lack of skill and experience in the secondary  will allow for a giant passing day. Stroud has looked impressive in two weeks of play, but  has one major flaw that has stuck out in both games. After he hits his receivers for multiple big passes , Stroud can take Saturday as a chance to figure out how to run efficiently. Thus far, we have mainly seen disaster scrambling. This has raised the question  if Stroud can execute designed quarterback run plays with confidence. Quarterback runs have been an exciting part  of Ohio State’s offensive success the past two years, it would be a joy to see it continue.

You can listen to the Buckeyes live on WHBC with pre game at 1:30pm and kickoff at 3:00pm